In 1886, Menilik II came down from the heights of Mount Entoto where he had thought to establish his capital, to join his wife, Taitu, who had already sampled the advantages of the natural hot springs (Filwoha) at the foot of the mountain. By the beginning of the century the new city was well established with several large buildings and growing population.
Today, Addis Ababa is a city of contrasts, of modern offices and apartment blocks, broad avenues, fine hotels and restaurants. Between and around them are the modest dwellings of the less well to do and cattle and donkeys are to be seen in the streets. Addis Ababa enjoys an ideal climate with brilliant African sunshine and the clean cool air of an altitude of 2400 meters. With a population of about 5 million inhabitants, Addis Ababa is the hub of the country. 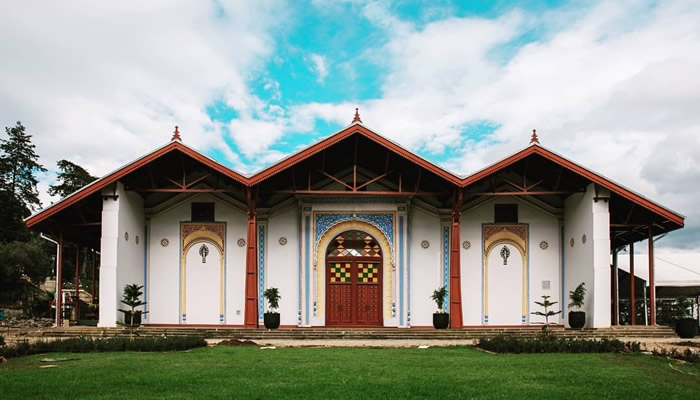 There is much to see and do in and around Addis Ababa:

The National Museum comprises many archaeological and historical findings including the old skeleton of Lucy, a famous complete hominid fossil, crowns and jewelry of different emperors and different art works.

Is the biggest Orthodox Church in the country. It was built in 1941 by Emperor Haile Selassie in memory of the Ethiopian patriots who fought against the Italian intruders. Here you find scripts of the imperial families, Greek statues, stained glass window paintings from the Old and New Testament and coffins of Emperor Haile Selassie I and his wife. In its graveyard Sylvia Pankhurst, the English Suffragette and subsequently a long-time friend and defender of Ethiopian independence, is buried among Ethiopian patriots.

The church of St. George was built by Menelik II in 1896 following his victory over the Italians at the Battle of Adwa. St. George was the patron saint of the soldiers and the church is dedicated to him. The most interesting feature of the church is its interesting artwork of both modern and traditional church painting. In the church premise, there is a bell tower and a permanent exhibition of different artifacts.

Built in 1911 in the old Baata Church, it serves as a tomb for Emperor Menelik II, members of his family and other famous martyrs.

This modern palace was build to commemorate the Silver Jubilee of the coronation of Emperor Haile Selassie I. Lions are kept in the park nearby.

Mercato, the largest open market in Africa, is a place where everything is on sale. Everything you'd ever want or need can be found here. Here you will be presented with a confusing, but fascinating rage of goods from all over the country. Walking on the crowded streets you see and smell the spice market, browse through the cloth shops and bargain with the merchants.

Fifteen-minute drive from Addis Ababa, at an altitude of 3019m, lies Mount Entoto offering a superb view of the capital and the surroundings. Emperor Menelik II wanted to build his residence here, before the foundation of Addis Ababa. Women are carrying huge bundles of firewood from the Eucalyptus forest and you can visit the interesting St. Raguel church built in 1880's.

Refer to Excursion trips from Addis