Semitic languages are related to both Hebrew and Arabic, and derive from Ge'ez, the ecclesiastical language. Amharic, the most important of these is also the official language of the state. Most Semitic languages speakers, to them belong the Amhara, Tigray, Oromo, Guraginya and Adarinya, live in the highlands in the center and the north of Ethiopia. The Tigray and Amhara are mainly agriculturalists, tilling the soil with ox-drawn plows and growing teff, the main grain in Ethiopia.Highlanders use heavy cloth capes and wraparound blankets to combat the night chill. National dress is usually worm on festivals and church days, when streets and meeting places are transformed into a sea of white, as finely woven cotton dresses, decorated with colored woven borders are worn. Women of Amhara and Tigray wear dozens of plaits called Sherubal, tightly braided to the head. 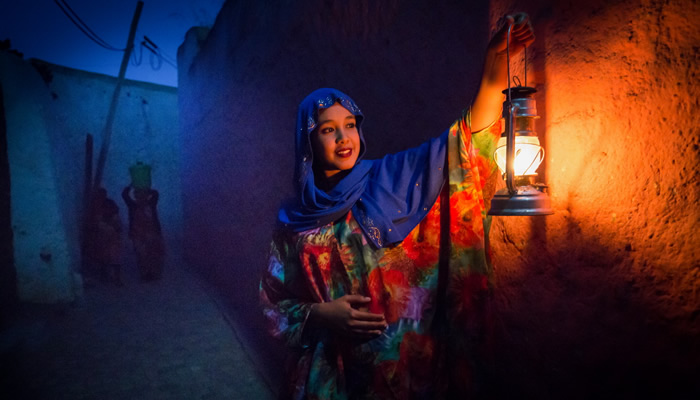 The Somali speaking population lives in the lowlands to the east and southeast in the hot and arid bush country. They are mainly pastoral nomads, following the grazing places of their cattle.
Both Muslims and Christians wear jewelry in silver and gold, often with amber or glass beds incorporated. Heavy brass, copper and ivory bracelets and anklets are also worn. Women in Harar part their hair in the middle and make a bun behind each ear.

The Muslims of Harar, wear very colorful dress, the men in short trousers and a colored wrap and the women in fine dresses of red, purple and black. Further to the north in the hostile environment of the Danakil Depression live the semi-nomadic Afar which are also pastoralists. In the heart of the lowland plains, light cotton clothes are all that is required by men and women alike. The lowland Somali and Afar wear long trousers called Jodhpur, a tight shirt and brightly colored cotton warps called Shamma.
Nilo-Saharan speakers, to them belong the Gumuz, Berta and Anuak, live in the southwest and west along the border to Sudan. Also most of the many indigenous tribes live in the southern and western part of the country.

The Cushitic speaking Oromo, formerly nomadic pastoralists living in the highlands and lowlands of the center and south, are now mainly engaged in agriculture even so in more arid areas cattle breeding is still the main preoccupation. The Oromo of the highlands of the Bale region can be often seen in traditional bead decorated leather garments. On festivals such as Meskal. Oromo horsemen dress up in costumes made of lion or baboon-skin and carry spears and shields while they ride down to participate in the parades. Bale girls cover their head with a black cloth while young children often have their heads shaved. Arsi women wear fringes and short, bobbed hair.

In the southern lowlands of the Omo Valley and the western part of the country live many of the Omotic speaking tribes.