Axum Axum, the holy city of Ethiopia and resting place of the Arc of the Covenant, reached its height between the 1st and 10th century. It was a kingdom of great wealth and sophistication, controlling the caravan routes from the hinterland of Africa trading with ivory and slaves. Its kings minted gold coinage when almost no one else in the world was rich enough to afford it or sophisticated enough to require it. The Axumite kingdom's conversion to Christianity in 333 AD, during the rain of King Ezana, made Ethiopia since then a land of innumerable churches and monasteries. 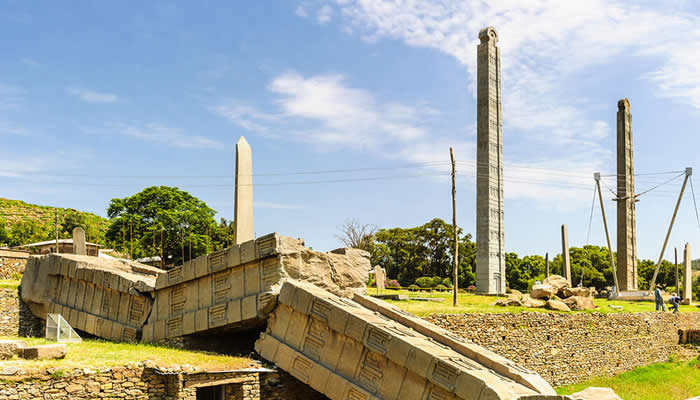 According to the Orthodox Church the original Ark of the Covenant, containing the tablets of stone with the 10 commandments, lies in Axum. Menelik I, the son of King Solomon and Queen Sheba, brought it with him when he returned from a visit to Jerusalem to see his father. The Ark is now rests in the St. Mary of Zion church, the oldest church in Ethiopia, under close guard of a priest. Nobody is allowed to see it. Not even the high priest of Axum.
The original St. Mary of Zion, which dated back to the forth century, was burned down in 16th century by the Muslim invader Ahmed Gragn. In the 17th it was rebuilt by Emperor Fassiledes in the same style as his castle at Gondar. A second church of St. Mary (and the only one open to women) was built nearby in the mid 1960’s by Emperor Haile Selassie. Its museum has a small but impressive collection of bibles, crosses and crowns.

Just past the museum is Aksum's ancient stele field, remains of the city's past glory. Stele are huge, carved pillars made from a single block of granite. The largest obelisk, which was 35 meters long and weighed 500 tons, lies broken on the ground. Near it stands a smaller but nevertheless most impressive 24-metre-high obelisk - the pride of Ethiopia. A somewhat larger obelisk was taken to Rome in 1937 by the Italian dictator Benito Mussolini and was returned back to Axum recently.

If you take a walk outside the town, you reach the ruins of King Kaleb's Tomb and Queen of Sheba's Palace and if you keep going uphill you'll end up at the Pentalewon Monastery - women aren't allowed in, but the views from here are lovely.

Debre Damo is built on a high plateau and can only be reached by scrambling up a cliff holding on to a leather rope. Its inaccessibility gives some clue why the monastery served as a sanctuary for Ethiopia's rulers during times of war.
In the 5th or 6th century nine holy men arrived in Ethiopia to spread Christianity. One of these men, Za-Mikael Aregawi, is believed to have founded Debre Damo. The ancient monastery of Debre Damo is the oldest standing church in Ethiopia and of great importance for the Ethiopian Orthodox Church.

Especially during the Zagwe dynasty, the aristocratic families of the north saw the great monasteries as an alternate base for power. The king often used these grants, known as gült, to enrich the monasteries that would support him, and the Zagwe were quite rightly suspicious of Debre Damo. It was a monk trained here who helped the Solomonid pretender Yekuno Amlak to overthrow the last of the Zagwe kings.

Situated ca. 50 km east of Axum lies Yeha, which used to be Ethiopia’s first capital in the 5th century BC. On the way we pass Adwa, the battlefield where Emperor Menelik II was defeated by the Italians over a century ago. This whole area shows a great amount of terracing on the flanking hills. The imposing, well preserved Yeha temple is visible from the distance, rising above the church of Enda Aba Afse and its enclosure. With up to 52 course masonries and massive walls, it dominates the whole valley with its high windowless wool.