Over 125 rock-hewn churches are recorded in Tigray alone. These churches date from the 4th-15th century. Most of them lie scattered around the Gera-Alta mountain chain. Next to some pre Christian templates Abreha We Atsbeha and Wukro Cherckos, hewn in the 4th century, are the two most famous and most accessible churches, which can be visited within two or three days in addition to the historical route itineraries. 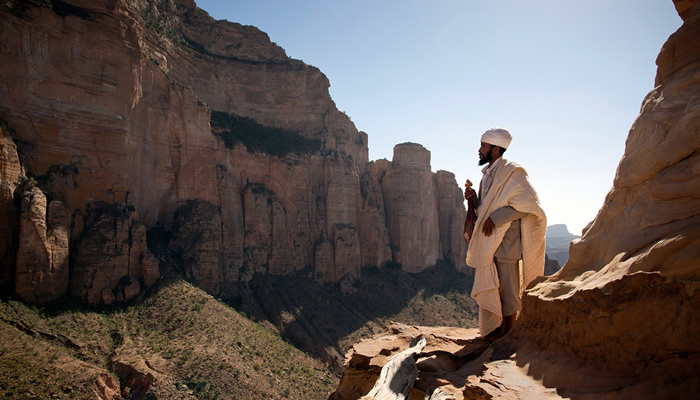 African Adventure Tours can organize special itineraries to visit the rock churches of Tigray. By car, combined with trekking and camping (there are also a few new lodges appearing in the area) you could visit quite a few churches in about 4 or 5 days.

A newly built gravel road leads to the church of Abreha We Atsebha, which is situated 15 km west of Wukro.

The church is cut into the red rock overlooking the valley and stands out with its white painted facade and tall blue doors. Its interior is decorated with splendid post-17th century mural paintings depicting biblical scenes. The most valuable treasure is a prayer cross which belonged to Furmentius, Ethiopia's first bishop.

The church is the largest and the most impressive of Tigray's rock churches and is dedicated to the brothers Abreha and Atsebha, former kings of Axum, who are said (dispite historical evidence) to have adopted Christianity in the 4th century.

47 km from Mekele on the edge of the small town Wukro lays the rock-hewn church of Wukro Cherckos on a knoll of red rock. The church is supposed to have been constructed by the two kings Abreha and Asbeha in the 4th century. The upper part of the wool and the ceilings were painted, but now much is destroyed. Nevertheless, a good impression of the decoration can be gained. According to the priests the church was burned down by the Judaic Queen Gudit in the 10th century, who destroyed many Christian monuments and also toppled the Axum stele as the Axumite kingdom came to an end.