Lalibela: The eight wonder of the world

According to legend Lalibela was born as the brother of the ruling Zagwe king in the 12th century. As a child he was covered by a swarm of bees, which his mother saw as a sign of his later reign. His brother, not happy with the prophecy, tried to poison him, but did not succeed. Still, Lalibela spend three days in a deep sleep, time during which he was carried away to heaven and instructed to build the rock town he has seen there. At the same time his brother had a vision in which Jesus ordered him to resign in favor for his younger brother. 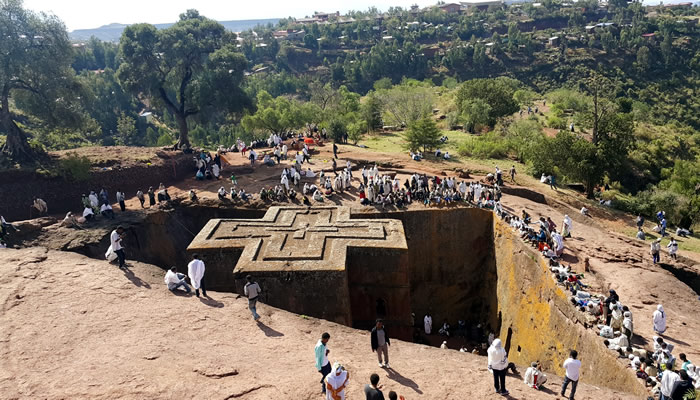 As soon as Lalibela became king, he began to gather craftsmen and workers for the construction of the rock-hewn churches. According to legend angels worked beside his men as they cut each one from the rock, so the construction was developing fast. The town, formerly known as Roha, became known as Lalibela and began to draw thousands of pilgrims. Although his dynasty was overthrown, Lalibela is still referred to as a saint.

The town of Lalibela, lies among the Lasta Mountains at 2630 m above sea level and remains until today a place of pilgrim and devotion for Ethiopian Christians. Until recent years it was hard to access as there was no road to it. It doesn't matter if you have seen rock-churches before. Nothing will prepare you for this and you will understand why Lalibela is also referred to as the eight wonder of the world.

Excavated from a sloping mass of red volcanic scoria underlaid by dark grey basalt and interconnected by a maze of tunnels and passages with openings to hermit caves and catacombs the rock-hewn churches give the impression of an underground city. But not only have the rock-churches survived until today. Something far older has, too. The churches' breath. If you see believers with a bible in their hand sitting there in prayer and listen to the chanting, you get the impression that time is standing still, that you witness a scene who has taken place hundreds of years ago. The churches are for at least 800 years the religious and spiritual center of the region. Lalibela is referred to as a New Jerusalem, with a river named Jordan and sites corresponding to the holy places of the great city. An Ethiopian saying says: "If you do not wish to see Lalibela, you are like someone who has no desire to see the face of Christ."

There are two main groups of churches, with another church dedicated to Saint George a short distance away. All eleven rock-hewn churches can be visited within two days. From the street and even closer they are hardly visible, something that has preserved them until today. Some churches are monolithic, some of the basilica type, having archaic features and imitating architectural elements from earlier periods, some of them are remarkably similar to the architecture of ancient Axum, yet each church has its individual style. Some churches do not follow the conventional alignment of churches to the east which gives room for speculations that they were originally build for some other purpose.

The first group of churches comprises of six churches which lie in rock cradles one behind the other. Bet Medhane Alem, with 11,5m height the largest one, is built like a Greek temple and its stone floor is so polished by the countless numbers of visitors that it reflects shafts of light from apertures in the walls high above. In a corner are three empty graves symbolically dug for biblical patriarchs Abraham, Isaac and Jacob. A short passage leads to Bet Maryam, Bet Danagel und Bet Meskal. Bet Gogotha and Bet Debre Sina, the two most charismatic churches share an entrance.

Bet Giyorgis, the most elegant church, lies somewhat isolated in the southwest part of the village on a sloping rock terrace. It can only be reached through a tunnel. The other group of four, south of the Jordan River, comprise of Bet Emanuel, Bet Mercurios, Bet Abba Libanos and Bet Gabriel-Rufa'el. Bet Gebriel-Rafael is the most imposing church of the southern cluster, displaying Axumite influences. According to legend it was built within a single day. The circa 1400 year old cave church Bet Mercurios could have served as a prison. Some of the churches could have been built before the reign of Lalibela.

More rock churches (also open for women) can be visited with an excursion from Lalibela:

Built on a ridge at 3150 m altitude, 8 km from Lalibela, lays this 13th century monastery, offering excellent views of the surrounding countryside. The steep road to the monastery, which looks like a twisted rope hugged to the wall, takes about 4 hours by mule and is a rewarding experience. Inside the monastery you find the 13th century processional crosses of King Nakuto Le'Abe who ruled in Ethiopia for 40 years just after King Lalibela.

This most impressive cave church, 42 km north-east of Lalibela, was built by King Yemrehanne Kristos in the year 1087 AD. This wood and stone construction with its white marble panel exterior resembles the architecture of old Axum. In medieval times the church attracted many pilgrims due to its curative holy water. The remains of over 10.000 pilgrims from Syria, Egypt or Jerusalem, who came here to die, lie in a chamber behind the main building and add to the eerie feeling that the cave already has.

One hour drive from Lalibela (or 4 hours by mule) lays this monolithic rock church on a high platform of pink stone. The church was build during the reign of King Yakuno Amlak in the 13th century and does not resemble any of the Lalibela churches. If you keep on walking for about two hours you reach Mekina Medhane Alem, which resembles with its layer building style Yemrehanne Kristos. The church was probably built in the 6th century and its inner walls are decorated with complicated geometrical designs and paintings.

Southwest of Arbuta Insesa, only the façade of this church is visible. Three of the church walls are carved from the rock while the ceiling is still part of it. Nearby lays Bilbala Cherqos with its excellent murals of saints and evangelists.

This most impressive monastery is built - rather than excavated - within a big cave on the edge of a steep cliff. King Nakuto Le'Abe gave up his throne in 1270 AD and went to this cave to live a hermit's life. This cave has ever since become a monastery. It houses an interesting collection of ancient crosses, illuminated manuscripts and other icons, some of them belonging Nakuto Le'Abe.

South-west of Yemrehanne Kristos, 6 km from Bilbilla, lays this tiny monolithic sanctuary built in the style of ancient Axum. A spring within the church produces holy water.