One of the gates in Harer Located in the East of Ethiopia, about 530 km from Addis Ababa, lays the Islamic city Harar, which has recently been registered by UNESCO as a World heritage site. Perched on a gentle hill on the Ethiopian highland plateau at an altitude of 1850 m, with a mild climate and fertile soil, as well as enough water to establish a sustainable agriculture system Harar had favorable conditions for development. 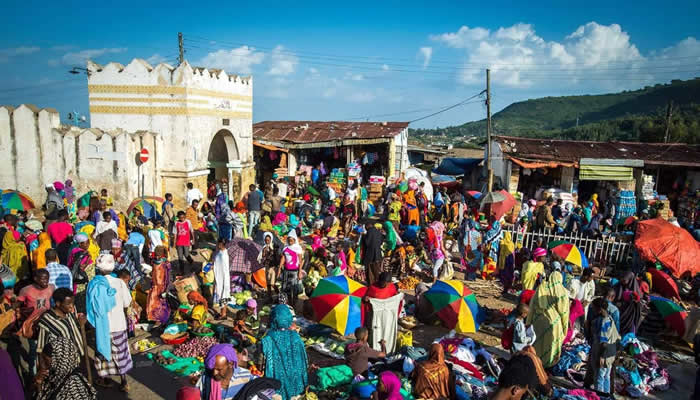 It doesn't matter when you visit Harar. When the coffee bushes are in flower and the air is heavy with their strong scent, or when the ripe fruit of the orange trees glow in the sunlight, it is always lovely in Harar. Many of the Harari houses have courtyards with green plants, pots and benches, which give a sense of peace and order so characteristic for traditional Islamic life.

With its numerous mosques and shrines, Harar is considered an important Islamic centre after Mecca, Mediana and Jerusalem. This old city which claims more than a millennium of history is warm and inviting and still radiates an aura of lived culture, which gives the city the touch of a living museum. The ancient wall, narrow streets lined with Harari houses, colorful, buzzling markets known for basketry and filigree silver handcraft make Harar worth a visit. Another attraction is locals who feed the wild Hyenas of the region at dusk.
There are many legends related to the foundation of the city. However, the name Shakih Abadir, who came from Arabia to Ethiopia in the 10th century together with his entourage, keeps on appearing. But the city was probably founded earlier, between the 7th and 9th century.

The agricultural system of Harar was effective and efficient. The production of the world famous coffee Arabica and the mild stimulant cath edulis were lucrative export items. Still, Harar also benefited from caravan trade between the Red Sea, the Indian Ocean and the vast Ethiopian hinterland. The stable economic base made Harar a leading center which was able to develop a unique urban culture uninterrupted through the centuries.
After the wars of Gragn, Harar was exposed to frequent attacks from different sides. As a result, Nur, the nephew of the Imam Ahmed Gragn, built the remarkable, 3348m long, defensive wall popularly known as Jugal. The wall engulfs the 48 hectares of the city and is of major cultural importance as it gives a sense of direction, security and belonging to its inhabitants ever since.

After its heyday as the center of the mighty Adal state, Harar gradually declined and became a small city-state ruled by the Dawoodi dynasty. During these days the gates where closed to European travelers. Emperor Menelik occupied the city in 1887, resulting in the incorporation Harars into greater Ethiopia. Although it lost its independence, Harar remains an important economic centre.
During the Italian invasion the northern farmland where destroyed, but the old city remained untouched, which enables today's traveler to transcend space within a walking distance form a modern city to a medieval pre-industrial realty. There are also still a few archeological sites awaiting excavation to tell their stories.

Some 55 km away from Harar, at the foot of the escarpment lays Dire Dawa. The climate here is considerably warmer and drier. If you fly to Harar, you have to pass through here, as it is the nearest airport.The relatively young city was founded in the 19th century as a result of the construction of the railway. Some 100.000 inhabitants live here. The old part of the town, with its twisted streets and Arab-Style houses, where veiled Somali women in black velvet can be seen, presents quite a contrast to the tree-shaded boulevards and modern houses of the newer quarters.