The clothing of the indigenous people is simple and effective: a short wraparound toga, enhanced with iron rings and other craft jewelry. Still, every group has its distinctive, individual style. Men and women of some tribes are further decorated with tribal scars, which are at the same time a sign of beauty and denote their standing in the community. The women walk bare breasted, wearing a simple short skirt of leather, the hems elaborately decorated with metal works. 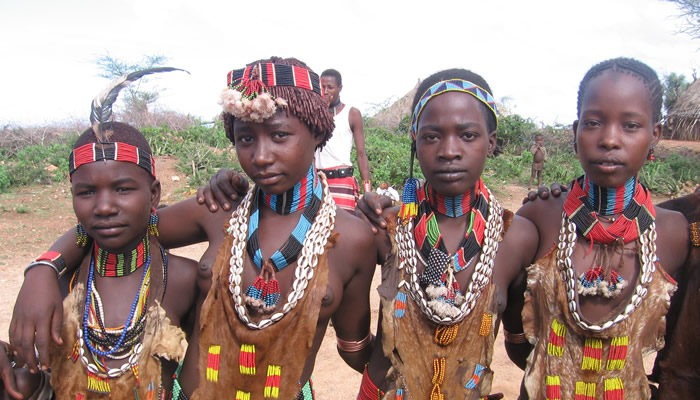 Hairstyles however, are more elaborate. Hamer women plaint beaten tin plates into their hair. They create copper-colored breads by rubbing a mixture of red clay into their hair. Hamer, Geleb, Bume and Karo men form a ridge of plaited hair and clay to hold their feathered headwear in place. Also body painting, using clay and locally available vegetable pigments, is common. Mursi and Surma women are well known for the large clay discs they wear inserted in their ears and lower lips.

Many unique ceremonies and rituals like the Bull jumping of the Hamer or the Stick fighting of the Surma make the Omo Valley and western Ethiopia to some of the most interesting regions on the African continent.

Events and Culture Celebrations in the Omo Valley of Ethiopia

The different tribes and ethnic groups of Ethiopia have a weekly market where they buy and sell their products. Market places are colorful and lively places, attracting people from all around the region.

Bull Jumping
The Hamer, Tsemay, Benna and Besada people share traditions and rituals. One of the most important is the 'Bull jumping'. If a young man wants to marry the girl of his choice he has to jump over about 10 bulls standing side by side, picked by the girl's family. It is more of a walking over the backs of the bulls rather then jumping and the young man has to walk four times, two times in each direction - falling not allowed. Friends (called the 'maz'), who have successfully performed the jumping are allowed to help by keeping the cattle in place. If the jumper fails people will often blame the wind for his failure and they allow the aspiring groom a second chance. If he still fails it is considered a bad sign and he will have another chance a year later.
If the groom-to-be succeeds, he may keep the girl in exchange for cattle he gives to her family. For two months the betrothed couple will share blood and milk. Blood from the cow's neck is mixed with her milk and drunk. A wealthy, strong man may marry up to four women.

DONGA
Donga is a stick fighting event of the Surma people. Players are usually young, unmarried men who paint their naked bodies with a mixture of chalk and water before the fight. Each contestant is armed with a hardwood pole about six feet long. The pole is gripped at its base with both hands, the left above the right in order to give maximum swing. Each player beats his opponent with his stick as many times as possible with the intention of knocking him down and eliminating him from the game. The winner is carried away on a platform of poles to a group of girls waiting at the side of the arena who decide among themselves which of them will ask for his hand in marriage. Taking part in a stick fight is considered to be more important than winning it.

Refer to Tour to the tribes of Omo Valley