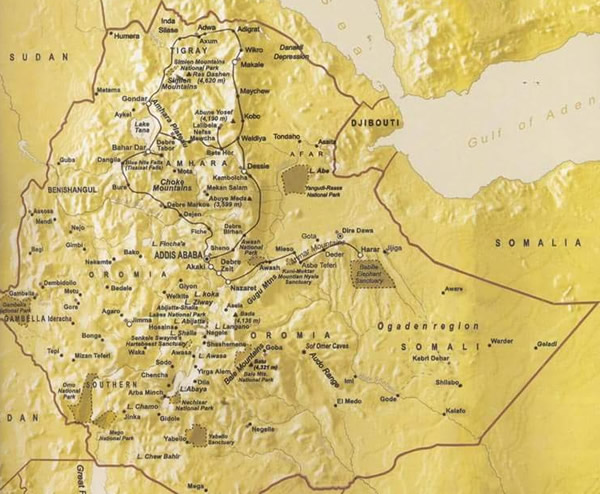 This little known destination, which is the birthplace of mankind, holds an exciting and unexpected surprise for many travelers. The combination of historical, cultural and natural attractions make Ethiopia unique in Africa.

Ethiopia, like many other African countries is a multi ethnic state. With a population of 100 million people and over 83 different ethnic groups, languages and dialects is Ethiopia a land full of cultural diversity and contrasts. As the only African country spared by the colonization Ethiopia was able to maintain its own language and calendar as well as many ancient customs and traditions.

The official language is Amharic but Tigrinya, Somali, English and Arabic are spoken by a variety of people. The Ethiopian calendar is eight years behind the Gregorian calendar, the time 6 hours behind western time.

Religion is a constant and central feature of Ethiopians society, best displayed in the many, colorful festivals, which take place throughout the country. Nearly half of the population is Christian, belonging to the Ethiopian Orthodox Church, some 35 % are Muslim and the rest adheres to traditional and other beliefs. Ethiopians of all religions live peacefully together and are genuinely friendly and hospitable.
Blessed with a variety of landscapes as well as abundant bird and wildlife Ethiopia offers astonishing travel opportunities. The land features fall into three main categories, the mountainous, fertile highlands, the lowlands and the Great Rift Valley.

While on the highland the climate is moderate, the lowlands are hot and dry. The Rift Valley region, with its occasional hot springs, offers everything from hot to moderate climate. From the peak of Mount Ras Dashen to the depths of the Danakil Depression, Ethiopia is a land of enormous natural beauty.