In Ethiopia it is a sign of friendship to eat together off one large circular plate. You eat with your right hand, and should always wash your hands before eating. Visitors and guests will have choice morsels and pieces of meat placed in front of them, which should be eaten last, unless you want more pieces placed in front of you.

Ingera is a soft, sour dough pancake made from a grain known as teff. Similar to bread, it is eaten to everything and used to pick up pieces of meat or to mop up the sauce.
Teff, belonging to the lovegrass species (Eragrostis), has very fine seeds, which contain symbiotic yeast and three times the iron of wheat. The ingera batter is allowed to sit for three days so the yeast can become active, before it is cooked in a large flat oven. 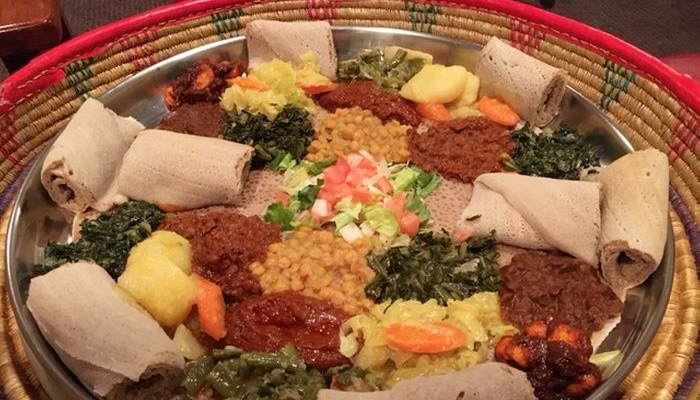 better known as chilly, is used widely and in big quantities and gives Ethiopian food its characteristic taste. For those who like it milder there are a variety of Greek, Chinese, Indian and European restaurants in Addis. Pasta is also available most of the times.

should try "fasting food", which orthodox Christians eat during the fasting periods and which is free of meat and animal products.

Traditional alcoholic beverages are tela (a local beer made from grain), tej (honey wine or mead) and kati kala (distilled liquor). Ethiopia produces also wines like Dukam, Gouder, Axumite or Crystal as well as spirits, like gin, ouzo and brandy.

No visit to Ethiopia is complete without participating in an elaborate, traditional coffee ceremony. The ceremonial apparatus is arranged upon a bed of grass, the green beans are roasted in a pan over a charcoal brazier while the rich aroma of coffee mingles with the heady smell of incense that is always burned during the ceremony. The crushed beans are then brewed in a black pot with a narrow spout and served with some sugar from small handless cups.

Ethiopia, home and origin of the coffee plant, cultivates and exports coffee Arabica, one of the world's finest coffees, since the 9th century. Premium washed Arabica beans fetch high prices on the world market. About 600 years ago it traveled to Yemen from where it started its journey around the world.
Among the many legends about the origin of coffee, one of the most popular is that of an Abyssinian goatherd, who one day observed his goats behaving in an exuberant manner, skipping, rearing on their hind legs and bleating loudly.

He noticed they were eating the bright red berries which grew on the bushes nearby and tried a few himself, soon feeling a new sense of elevation. He filled his pockets with the berries and ran home to show his discovery to his wife, who advised him to take them to the monks of the nearby monastery. The chief monk declared them as "devil's work" and hurled the berries into the fire. Within minutes the monastery filled with the heavenly aroma of roasting beans and the other monks gathered to investigate. The beans were raked from the fire, crushed to extinguish the embers and covered with hot water to preserve their goodness. That night the monks sat up drinking the rich and fragrant brew, and from that day vowed they would drink it daily to keep them awake during their long, nocturnal devotions.