Fasilades Castles in Gondar 1 Some 180 km from Bahir Dar, on the northern shore of Lake Tana, lays Gondar, famous for its spectacular castles, also known as Africa’s Camelot. Emperor Fassiledes, hoping for a better residence during the raining season, founded the city in the 17th century with the construction of his first castle and the developing village. During the following decades, Gondar became the capital of the empire and remained so until the middle of the 19th century. The city was an important hub between caravan routes of the north and the south of Ethiopia. 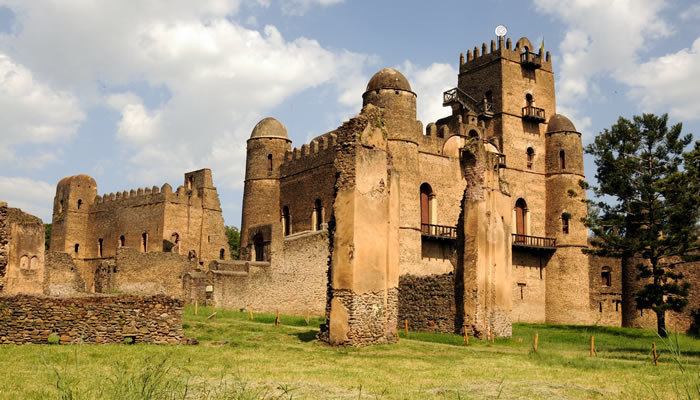 The history of Gondar is full of murders, poisonings and court intrigues, which lasted until the reign of King Bakaffa and his clever wife Mentwab, who outlived her husband. Trying to prove their status by surpassing their elders as well as their rivals, it seems that each emperor built his own castle, ignoring those of his ancestors.

A massive wall with twelve gates surrounds the castles which are situated in the center of the town. The fact that their defensive walls would not have withstood the military technology of the day suggests that they were constructed mainly for display. Ethiopian emperors liked to display their wealth and power by employing foreign experts, as in this case Italian and Indian masons. Gondar’s power declined during the chaotic Era of the Princes (1706-1853 A.D.), when powerful warlords ruled the land. Emperor Tewodros II sacked Gondar twice during the 1860s, removing the treasures of its churches. Troops of the Islamic, Sudanese Mahdi burned the city during the 1880s down. Still, many of the most impressive castles and churches remain. Today Gondar is an important economic and cultural center of the region, attracting quite a few visitors. The remains of ancient history add to the city’s appearance and to its charming atmosphere.
Other treasures of Gondar include:

The charming pavilion known as the Bath of Fassiledes, where the annual celebration of Timket (Ethiopian Epiphany) takes place, is one of them. Built near a river, about 2 km from the city center, it is empty most of the time. Only for Timket, one of the greatest festivals of orthodox Christians, the pool is filled with water brought through different ancient canals.

Also the ruined Palace of Kusquam, the 18th century Palace of Ras Beit as well as the church of Debre Berhan Selassie are well worth a visit. The church was built in the 17th century and its inner walls are marvelously painted from top to bottom with innumerable scenes of biblical lore and medieval history.